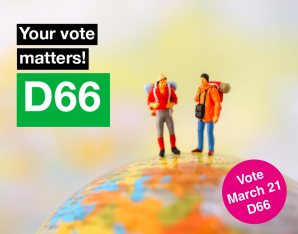 Am I eligible to vote in the municipal elections?

Yes, if you are a resident of a Dutch municipality and:

Why should I vote in the municipal elections?

There is one simple reason: it is your city too! The municipality plays an important role on issues such as traffic (bike, car, public transportation), leisure (sports, bars, cultural events) and facilities (expat centre, international education, public information). Different political parties have varying views on how these topics should be prioritised. There are also large ideological differences on how parties view topics such as immigration, sustainability and the European Union. You have a say in this, your vote shapes the future.

Am I eligible to vote in the referendum on the Intelligence Act?

Do I need to register as a voter?

No, if you are eligible to vote you will automatically receive an invitation via a so-called poll card (stempas) by mail from your municipality.

When will I receive my poll card (stempas)?

When can I vote?

The elections will be held on the 21st of March. On that day you will be able to cast your vote at any polling station between 07.30 and 21.00.

Where can I vote?

You are allowed to vote in any polling station within your municipality borders. This can be a polling station near your home or workplace, but it could also be somewhere else.

On your poll card (stempas) the address of one specific polling station will be printed. This is only a suggestion by the municipality for a polling station nearby your home. But you do not have to go there to vote; you can go to any polling station in Weesp.

What should I bring when I go to vote?

You need to take 2 things with you when going to vote:

How does voting in a polling station (stembureau) work?

When you enter the polling station (stembureau), you will be met by 3 or 4 people sitting behind a table. They are the polling station members. You hand them your poll card (stempas) and a valid identification document. They will check your name against a list of excluded persons. After this (quick) check you will receive your voting pass which is a large paper document folded together. You will then be able to enter a voting booth where you can unfold the voting pass.

In the voting booth there will be a red pencil that should be used to select the candidate of your choice. You cannot vote solely for a party but must vote for a specific candidate within the party. If you have no particular preference you can simply vote for any candidate listed within a party. You vote for a candidate by colouring in the open circle that will be displayed in front of the candidate’s name. After this you should fold the document back to its original shape (more or less) and proceed towards the ballot box, outside the voting booth, into which your folded voting pass should be placed. You are now done and can leave the polling station.

Where can I find more information?

Have questions or problems? We will gladly help you: info@d66weesp.nl. Credits for this practical guide go to D66 Utrecht.